The Creation of the Oxford-Brazil EBM Alliance

In 1994 Sir Muir Gray started an evidence-based medicine movement in the UK. He invited David Sackett, a physician, teacher, and pioneer of modern day evidence-based medicine, to Oxford to found the first of several centres around the country. By 1995 the Centre for Evidence-Based Medicine (CEBM) was established in Oxford.

David Sackett firmly believed that the provision of better clinical care to patients depended on providing healthcare professionals with the tools to understand and practice evidence-based medicine. The initial remit of the centre included support for the teaching and practice of Evidence-Based Health Care (EBHC) throughout the UK and Europe and the creation of formal graduate education in the conduct of randomized controlled trials and systematic reviews at the University of Oxford.

How has the CEBM delivered on this core mission some 25 years on? Under the leadership of the current Director Professor Carl Heneghan, and building on the work of his predecessors, the Centre currently has over 25 staff and honorary members from across the globe, involved in delivery of three Graduate Masters Programmes, four Post-Graduate Certificates, a Diploma, over 25 short courses, and a part-time DPhil Programme in the areas of EBHC, systematic reviews, medical statistics, qualitative and health research methods, value-based healthcare, and teaching EBHC.

The Centre also continues to fulfil its mission to support the teaching and practice of EBHC beyond Oxford. Its world-leading Teaching Evidence-Based Medicine programme includes over 1500 alumni from across the globe, each returning to their home institutes inspired with new and innovative ways to teach EBM. ‘Additional key outreach work includes the establishment of the first Centre for EBM in Lithuania, supporting EBM teacher training for the Irish National Cancer Control Programme and Clinical Effectiveness Unit, and EBM in Schools. The next exciting initiative is a partnership to develop a Centre for excellence in EBM teaching and practice in Brazil. 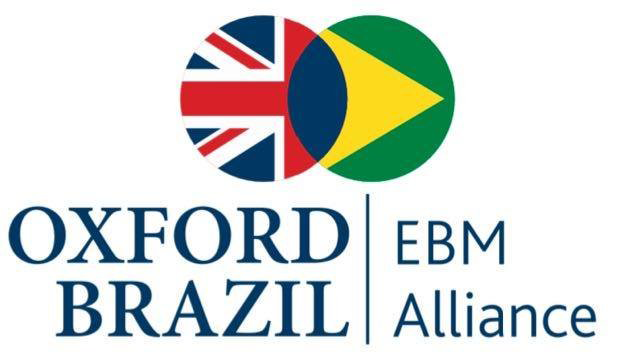 Brazil is the 5th largest country in the world, with a population of about 210 million people. Its 336 medical schools graduate an average of 34,000 medical professionals each year. Of these schools, under 20% include formal Evidence-Based Medicine teaching in their curricula. The lack of formal EBM integration into medical school curricula is not exclusively a national challenge for Brazil. Data from the USA and UK suggest that only 60% of curricula include formal EBM content. Despite the recognition of the importance of EBM education and its influence on medical training around the world, challenges remain in integrating EBM education into the medical curriculum, facilitating communication between practitioners, increasing the capacity for EBM’s use in clinical practice, and ensuring that medical professionals have the knowledge and skills to support evidence-based practice.

Concerned about these needs, two Oxford post-graduate students and Brazilian citizens, Dr. Luis Fontes (MSc in EBHC Systematic Reviews) and Enderson Miranda (DPhil in EBHC), who met while attending Oxford’s TEBM course in 2017, have joined forces with Dr David Nunan, a Senior Research Fellow in the CEBM, to create an international partnership between Oxford’s CEBM and the EBM Departments of leading Brazilian medical schools. This partnership, named the “Oxford-Brazil EBM Alliance,” has four principal aims:

The Faculdade de Medicina de Petrópolis (FMP-FASE) and Escola Paulista de Medicina (EPM) at the Universidade Federal de São Paulo (UNIFESP) are the pioneering Brazilian institutions to join the Oxford-Brazil EBM Alliance. The first activity stemming from the Alliance will be a 3-day workshop for medical educators in June 2019. This workshop, which will take place in Petrópolis, Brazil, sold out in record time, and the Alliance already has a waiting list for subsequent workshops. Professors and facilitators from Oxford and Brazil will carry out the teaching and facilitate the workshops. Other activities will emerge afterwards, as instigated by local institutions. This project is underpinned by the concept of creating and developing a Centre of excellence in EBM teaching and training, which hopes to become a standard bearer and reference centre, not only in Brazil but the rest of South America.

“I am proud to be part this exciting initiative, not least because Brazil holds a special place in my heart. Through the Oxford-Brazil EBM Alliance I can help bring Evidence-Based Medicine training to thousands of medical educators throughout Brazil. My hope is that our Alliance facilitates EBM teaching and learning, fosters future leaders, and ultimately benefits patients and healthcare systems throughout Brazil.” Dr David Nunan is a Senior Research Fellow and Departmental Lecturer in the Nuffield Department of Primary Care Health Sciences, Director of the Postgraduate Certificate in Teaching Evidence-Based Health Care, and a Supernumerary Fellow at Kellogg College

“This Alliance is the beginning of a very promising international partnership which intends to build a solid ground for the development and dissemination of Evidence-Based Health Care in Brazil. I feel very proud for leading this initiative in our country along with Enderson Miranda and Rachel Riera. We are honored of having the confidence and support of David Nunan and the CEBM from the University of Oxford. It is a great responsibility being associated with such world-class, leading institution. We hope we can help our healthcare system through the proper education of healthcare students and professionals in core EBM concepts and their value to appropriate clinical decision-making in different settings in Brazil.”

Dr Luis Fontes is a full-professor of EBM, Intensive Care, and Emergency Medicine at Faculdade de Medicina de Petrópolis, in Petrópolis, Rio de Janeiro, Brazil. He is a volunteer researcher from Cochrane and the current Director of the affiliate center Cochrane Brazil Rio de Janeiro. He is an MSc student of Evidence-Based Health Care (Systematic Reviews) at the University of Oxford.

“It is an honor to work alongside such an amazing team of experts and innovators to create a centre for excellence in Evidence-Based Medicine in Brazil. I feel an immense satisfaction to take what I have learned throughout the last several years in the USA and England back to my home country. Our utmost aim is to contribute to the continued improvement of the Brazilian healthcare system and the dissemination of EBM best practices that significantly benefit patients and their families.”

Enderson Miranda is a DPhil student of Evidence-Based Health Care at the University of Oxford, where his current research focuses on the appropriateness of treatment received by patients with advanced cancer. He is the CEO of OnSomble, a USA-based company that develops virtual-learning platforms for healthcare professionals.

“Teaching, researching, applying, and learning about EBM on a daily basis has given me the opportunity to work with people who are visionary, engaged, and do not hold back in their efforts to bring forward good science that improves research, teaching, and healthcare. This Alliance is a result of those efforts which have now become a reality. We will need everyone’s contributions to make it better each day. I am very grateful to Luis Eduardo, Enderson, and David for this opportunity.”

Dr Rachel Riera is a Professor of Evidence-Based Medicine at the Escola Paulista de Medicina, Universidade Federal de São Paulo, Brazil. She has been involved with EBM teaching for the past 18 years and has been an active collaborator at Cochrane Brazil. She is also the Coordinator of the Health Technology Assessment Centre, at Hospital Sirio-Libanês, São Paulo.

This article is republished from Oxford University on Medium. Read the original article.