Watching television drama, or reading a novel, draws us into other worlds and other lives through absorbing narratives and sympathetic characters.  Technologies (such as virtual reality, surround sound, high definition video) further stimulate our senses to create a feeling of being in the alternative world of a film or game, or together with someone far away. 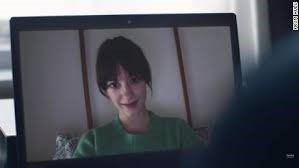 There is a scene in Normal People, the televised drama of Sally Rooney’s 2018 novel, where protagonists Marianne and Connell spend the night together - on Skype. The two have been on/off lovers since high school in small-town Ireland.  At school Connell was popular but Marianne was awkward; they kept their relationship secret. By the time we reach this scene they are older, at university in the city, and the dynamic of their relationship has changed. Connell is now the awkward one, uncomfortably back in his childhood home while Marianne is overseas on a seemingly glamorous trip to Sweden.   Connell is lonely and depressed; tired. Marianne tells him; ‘carry me over to your bed’, so he brings the laptop beside him.  The couple remain connected throughout the night, Connell asleep in the glow of the laptop and Marianne working at her desk.  Connell wakes to see Marianne still there. The videolink offers the characters a tender connection, a way of being present emotionally and socially while physically apart. It is an intimate scene, deeply evocative and redolent of both the history and uncertain future of their relationship. 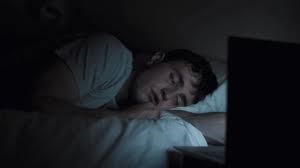 The overnight connection between Marianne and Connell exemplifies how an experience of presence can be created by technology. When these experiences are truly immersive, we experience what some researchers refer to as a ‘perceptual illusion’: a feeling of immersion such that we no longer notice the technology that sparks that feeling. This kind of feeling illustrates the concept of telepresence[i].

However, this way of thinking about telepresence is based on an enduring assumption that our feeling of being (tele)present is simply an illusion. Whilst technology may be increasingly sophisticated and create ever-more convincing simulations, we still have to suspend our disbelief to immerse ourselves in virtual experiences. This way of thinking about telepresence seems to fall short of the authenticity of connection that we might experience. Although fictional, Marianne and Connell’s connection resonates with all of us who have felt comforted by a phone call, a text or a skype with someone we love and miss.  If we consider our tele- or virtual presence to be merely an illusion, are we being fooled into feeling we are present when we are not? Is our technology some kind of trickery?

We think not. Inspired by ideas of distributed cognition (such as the kind of out-sourcing of brainpower we do when we rely on our electronic diaries rather than commit dates to memory) and distributed embodiment[ii] (when the feeling of being present depends on things such as cameras or microphones not just our own bodies), our team have been exploring the idea of distributed presence. Four of us in particular, Lars E. F. Johannessen, Erik Børve Rasmussen Elian Eve Jentoft  and Gemma Hughes are working together (virtually of course) to consider how technologies connect us.

With our new interdisciplinary research project ‘Virtual Presence’, led by Professor Marit Haldar at Oslo Metropolitan University with Professor Eivind Engebretsen at the University of Oslo and Professor Trisha Greenhalgh at the University of Oxford, we investigate how technologies are being used to create connections and experiences of virtual presence between people who are physically distanced to tackle the problem of loneliness.[iii]

The problem of loneliness and the solution of technology

Loneliness is a problem of modern life[iv].  Loneliness is bad for us, it is linked to poor health as well as social problems. Whilst technology offers a potential solution to the problem of loneliness, and has been a lifeline for many during the pandemic, technology is also considered by some to be a cause of loneliness.  Our phones are blamed for distracting us from engaging with the people we are next to, and social media is demonized for creating inauthentic personas and relationships.  The Norwegian start-up company, No Isolation, aims to harness the positive power of technology to tackle loneliness and social isolation. They have created two new technologies: KOMP, a video technology to link older people with their relatives and AV1, a communication robot connecting children and young people with long term illness to school. These are both so-called telepresence technologies, meant to offer presence at a distance.

We are interested in how these technologies are being adopted in different settings in both Norway and the UK, and what these technologies tell us about the nature of loneliness and social isolation.  We ask: if the solution to loneliness and social isolation is technology – what does that tell us about how we understand the problem? A central concern of our research is understanding what we mean by telepresence, which leads us to thinking carefully about the nature of presence. What does it mean to be present? How do we connect with people when we are apart?

We are exploring how telepresence is not just a feeling of presence but one that is materially arranged – through the stuff of our devices and the infrastructure of the internet.  We are interested in what presence means in different situations, and how presence is created through technology. We intend to develop new ways of thinking about presence and telepresence, with the aim of informing solutions to the problems of loneliness and social isolation.

[i] Lombard M. and Ditton T. (1997) At the Heart of It All: The Concept of Presence, Journal of Computer-mediated Communication 3.2.

[iv] Alberti, Fay Bound (2019) A biography of Loneliness: The History of an Emotion. Oxford University Press

Interrupted or invigorated? Qualitative health research during the Covid-19 pandemic

Gemma Hughes and Sara Paparini from the Nuffield Department of Primary Care Health Sciences reflect on the work of the IRIHS group.

Members of the Oxford Social Prescribing Research Group were invited to share their work and insights with the Boundless Creativity campaign, a joint research project between the UKRI Arts and Humanities Research Council (AHRC) and the Department for Digital, Culture, Media and Sport.