The hot beverage connoisseurs in the department may have noticed that the Green Impact group at the Nuffield Department of Primary Health Care Sciences (PHC) have been shaking up recent coffee mornings.

Charlotte Lee, who has been running the pilot, explains the idea behind it: ‘We teamed up with the LEAP research team to make plant-based drinks an option available to all staff, since some colleagues were already bringing in their own. The LEAP team suggested oat milk because it is one of the least resource-intensive of the plant-based drinks and tends to be most popular for taste.’

83% of people in the UK don’t understand that there’s any link between livestock and climate change.

LEAP research has shown us that 83% of people in the UK don’t understand that there’s any link between livestock and climate change. However, we know from the research of the LEAP project that livestock production has a negative impact on the environment and while it easy to see that eating steak, for example, is part of this, people often forget about the potential impact of dairy. Marco Springmann has calculated that the average UK citizen would need to reduce the amount of milk they drink by 60% in order to contribute to keeping global warming under a 2C increase. You can read his research in Nature.

The next step for Charlotte and the Green Impact team was running a pilot between the 1st and 30th November to assess the costings implications and overall environmental impact based on the consumption of oat milk. Oat milk was provided in each fridge and promoted during the Tuesday and Friday coffee mornings.

Ali Albasri, a member of the department, commented, ‘I wouldn’t have tried it if it wasn’t for the green impact team. I have had almond milk in the past and didn’t stick with it. I felt that it gave my coffee a natural sweetness which I quite liked as I don’t use sugar in my hot drinks.’

DPhil student Moscho Michalopoulou said, ‘Having grown up in a culture which promotes cow’s milk as a necessity, I had never thought of trying non-dairy milk alternatives. I tried oat milk for the first time during the coffee mornings and I was surprised with its rich taste. I can drink it on its own, which is something I could never do with regular milk, or add it to my porridge. What is more, I was glad to find out that it is fortified, low sugar and low fat, and has lower impact on the environment compared to other milks. As a result, I have now stopped buying regular milk and completely switched to oat milk.’

It’s important to flag that switching to different kinds of milk can have health impacts, although, as Moscho mentions, it’s increasingly easy to choose fortified non-dairy milks. 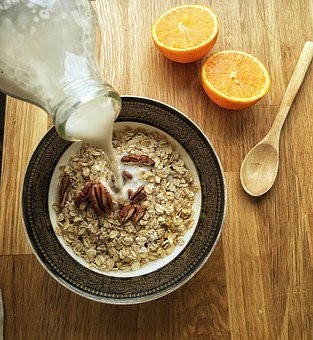 Narratives about the impact individuals can make are often framed in negative ways but of course individuals are part of systemic change. Jessy Morton, office manager, told us that the staff at PHC get through 12 pints of semi-skimmed and 8 pints of full fat milk a day. 20 pints a day is 100 pints a week, which becomes 5,200 pints a year. We asked Joseph Poore, a student on the Environmental Research Doctoral Training Partnership, to calculate the environmental impact if the whole of the department switched to plant-based milks.

According to Joseph, this would save:

For further detail, you can see Joseph’s calculations comparing different kinds of milks below.

The Green Impact Team have now put in an application for plant-based milks to be provided alongside dairy milk from January 2020 onwards. They hope that the pilot will help PHC achieve its second Gold Award in sustainability, as well as make a small step towards a healthier and more environmentally-friendly department. Thank you to Charlotte Lee for leading on this initiative, to Christina Potter for all her support, to Joseph Poore for additional calculations and to Lucy Yates for her public engagement contribution.