It is with great sadness that we announce the death, on Sunday 21 February, of Andrew Herxheimer, clinical pharmacologist and founding editor of the independent Drugs & Therapeutics Bulletin from 1963 to 1992.

Andrew was an Emeritus Fellow of the UK Cochrane Centre, convenor of the Cochrane Collaboration on Adverse Effects Methods Group and a co-founder of the DIPEx charity, which owns and runs www.healthtalk.org

Andrew Herxheimer and Oxford GP Ann McPherson (1945–2011) had the original idea for DIPEx (an acronym coined by Andrew as the Database of Individual Patients Experiences) after they both had their own illness experiences and realised how much, as patients and also as doctors, they could learn from other patients experiences. Andrew’s knee replacement in 1996 prompted a poem about his new knee.

Andrew hugely enjoyed playing with language and entertained us with a stream of puns, jokes and aides memoires (I always write ‘before’ instead of ‘prior to’ since Andrew told me that the latter should only be used to say ‘the nuns prefer the Prior to the Abbott’).

We will miss him enormously, and are so pleased to have held a party in the department to celebrate his 90th birthday in November 2015 (pictured right). 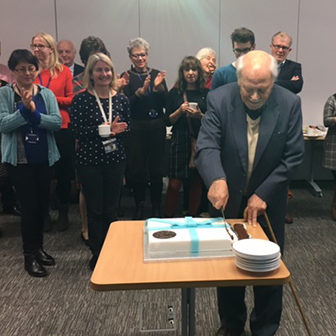 The Ballad of Andrew’s Knee, written two weeks after his total knee replacement:

After 70 years the knee was tired, weak, rebellious,
though still a friend and part of me
They replaced grating bone with plastic and steel,
fixed to the old bones, bound by faithful muscle and skin,
new parts of me on probation.

I bend them to my will to make them a full member of the team:
a happy and confident knee, setting off only a few alarms.
Ends need means said the foot to the hand.
Read our lips said the hips, gritting their teeth.