We’re really thrilled to have been awarded an Ig Nobel prize for our research. It came completely out of the blue – but as well as providing evidence which will contribute to day-to-day clinical practice, this study was intended to be a fun piece of science.
- Dr Helen Ashdown, Nuffield Department of Primary Care Health Sciences, University of Oxford.

Research to show a link between pain while travelling over speed bumps and acute appendicitis has been awarded the Ig Nobel Prize for diagnostic medicine.

The international Ig Nobel Prizes honour achievements that make people laugh, and then think. They celebrate the unusual, honour the imaginative and spur people’s interest in science, medicine and technology.

The prize winning research, led by Oxfordshire GP and clinical researcher Helen Ashdown (pictured above) from the University of Oxford’s Nuffield Department of Primary Care Health Sciences, demonstrates the value of questioning patients about pain while travelling over speed bumps to rule out those who do not need their appendix removed (appendectomy).

“Diagnosing appendicitis can sometimes be a real challenge for doctors, and even though several different clinical tests exist, appendicitis can only be fully confirmed by histological examination following surgery,” said Helen Ashdown. “Any tests that can help work out who might need an operation versus those who can safely be discharged home are beneficial.”

The study was published in the British Medical Journal in 2012.

“What’s exciting about these results is that they show us quite conclusively that the speed bump test can be used as a strong rule-out test for appendicitis, so it’s highly unlikely for a patient reporting no pain while travelling over a speed bump to then receive a positive diagnosis for the condition.  In fact, in our study the speed bump test was better at ruling out appendicitis than several other commonly used clinical tests currently available.”

Given how this test can help identify those who don’t have appendicitis, the researchers recommend that the speed bump test is incorporated into routine assessment, alongside other clinical features, for possible appendicitis to rule out the condition .

Commenting on the award on behalf of the team, Helen said:

“We’re really thrilled to have been awarded an Ig Nobel prize for our research. It came completely out of the blue – but as well as providing evidence which will contribute to day-to-day clinical practice, this study was intended to be a fun piece of science so it’s wonderful for it to have been recognised in this way.”

In their acceptance speech at the 25th First Annual Ig Nobel Prize Ceremony at Harvard University, the research team performed a parodied appendicitis consultation, reading out the following poem: 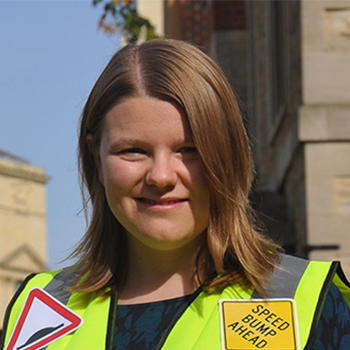 © University of Oxford
Dear Sir, this is our proudest day
But first of all we'd like to say
We'd never have achieved this perk
Without the other authors' work

And so that no-one else is missed,
We've brought along a thank you list
Our mums and dads, let's not forget,
I hope you're watching on the net
And all our cats and Aunty Jane…

Patient:
Dear God, I've got this awful pain!
I feel like I'm about to die
Farewell, cruel world, I bid you all goodbye

Relative:
Hey Docs, you fools!  Don't hang about
Get over here and help us out!
Just what the hell is wrong with him?
Please tell us, is the outlook grim?

A heart attack? A brain disease?
Or just a case of dodgy knees?
Appendicitis, could it be?

Surgeon:
It could be that, now let me see?

Radiologist:
But how?!  We have no CT scan,
Or Ultrasound, or X-ray man

Academic:
Just read our paper, then you'll know
That speed bumps are the way to show!
Just drive him quickly up a hump
You know, the pain will make him jump

Helen Ashdown interviewed by the Naked Scientists (at 08:49 on the clock)

For the latest news, events and updates, sign-up for our newsletter.