The Radcliffe Infirmary Outpatients’ Building: restored for a new era of healthcare innovation

Following a dramatic £14.1m renovation by the University of Oxford and the Nuffield Department of Primary Health Care Sciences, the former Radcliffe Infirmary’s Outpatients’ Building opens its doors this week to host Oxford's primary care researchers.

The building has been renamed the “Radcliffe Primary Care Building”, and an official opening ceremony is scheduled for later this year. The Grade II listed building was constructed originally in 1911 and has been empty since before it was sold to the University of Oxford in 2007. It is linked with several significant advances in healthcare.

While the building has undergone an extensive redesign by Niall McLaughlin Architects, it still retains some of its original features, including a wooden cold storage cupboard used for clinical laboratory samples, the wooden-panelled Chapel of Praise, and the hospital donation box. The original stonework façade has been restored and augmented with triple-height glass windows, allowing natural light to flood throughout the building, creating light and airy spaces and extraordinary views from most rooms of the 18th century Triton fountain and St Luke’s Chapel in the nearby courtyard.

The dedication to the advancement of healthcare in this historic building now continues with its reincarnation as the site of world-ranked primary care research. Head of Department, Professor Richard Hobbs, who is also a part-time inner-city GP, said:

“Relocating our primary care research department into this historic building is particularly fitting - it will put an academic commitment to better healthcare in the community within a building designed originally for the care of out-patients. We are the only clinical department of Oxford University’s Medical Sciences Division based in the very centre of this great and ancient city amongst the population we serve through teaching and research.

“This is also the first time the Nuffield Department of Primary Care Health Sciences has benefitted from a dedicated building in Oxford, and this restored building will give our multi-disciplinary team of researchers renewed vigour to look towards the future of primary care. This new building will provide a melting pot for new ideas and research collaborations, as we provide the evidence for how healthcare could be better delivered both locally and globally.” 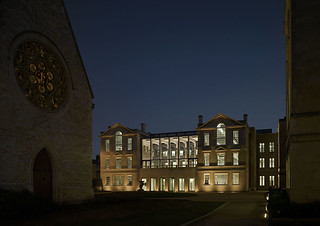 Researchers, many of whom are also part-time GPs, are pushing the boundaries of evidence-based medicine and medical statistics, “big data” approaches to health research and digital innovations in healthcare. The department also hosts a dedicated clinical trials unit.

The department previously occupied part of the Gibson Building on the Radcliffe Observatory Quarter, and the adjacent New Radcliffe House, which it shared with the Jericho Health Centre and Oxford University Press. The Gibson Building has been retained, mainly for use by its growing body of postgraduate students.